The Village of Benton is located on the Eel River, 9.21 km WSW of Meductic. It was settled in 1830 by settlers from the St. John River valley and was first called Rankin Mills from 1860 to 1873. 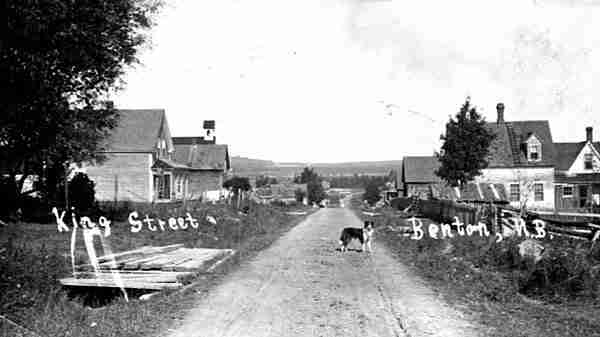 In 1866 Rankin Mills was a farming settlement with about 30 resident families. In 1871 Rankin Mills was a station on the New Brunswick and Canada Pacific Railway and had a population of 200. It was also known as Eel River Station after the railway was built and renamed Benton in 1873.

By 1898 Benton was a booming community with 1 post office, 6 stores, 1 hotel, 1 sawmill, 1 tannery, 2 churches and a population of 300. It was sometimes know as Eel River Station.

The Village is divided by the Eel River and connected by a covered bridge built in 1927.

Ducks Unlimited built a dam on the river near the village, creating a large backwater which is a very popular spot for canoeing and fishing.  On a warm summer day you’re bound to meet paddlers stopping at Molly’s Rock for a picnic.

On your way to the village, you pass the Agriculture Canada Benton Ridge Potato Breeding Substation, a large research facility. There, scientists are putting potential new potato varieties through their paces in the hopes of identifying superior potato selections to meet industry and consumer needs.

2 thoughts on “Village of Benton”

MyNB is supported by…