Early settlers of the area were Loyalists (possibly disbanded soldiers of the King’s American Regiment and their families) displaced by the end of the American Revolution (1780’s) later augmented by immigrants from Ireland (Ulster and Donegal, circa 1840 or so). 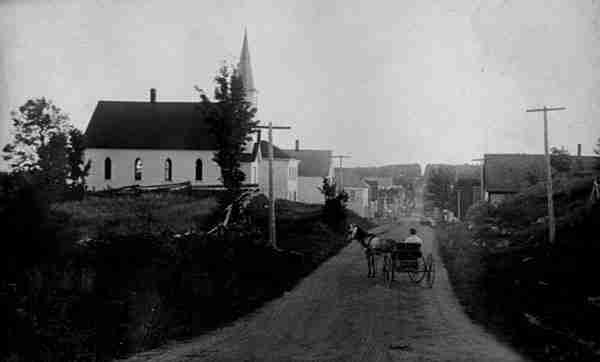 In the winter of 1865, Canterbury was briefly the focus of much military activity when some 9000 British troops passed through the village on their way to “The Canadas” (Ontario and Quebec). The British government had become alarmed about the possibility of an American invasion following the end of the American Civil War and sent this military contingent to reinforce the garrisons in The Canadas. As it was winter, the shipping season in the St. Lawrence River was closed leaving overland travel from British colonies in the Maritimes as the only option. The closest rail connection to Quebec from the Atlantic coast in the 1860s was the New Brunswick and Canada Railway line extending from the port of St. Andrews through Canterbury to the end of rails in nearby Richmond Corner. The large contingent of British troops debarked passenger trains at the station and were then driven by horse drawn sleigh up the Saint John River and then across to the St Lawrence to Levis (opposite Quebec City) where they re-boarded passenger trains operated by the Grand Trunk Railway.

Tracing its roots to the forestry and railway industries, Canterbury was once was home to over 1000 residents and served as a service centre for the surrounding area of western York County.

In 1866 Canterbury was a farming community with about 93 families, including 6 Dickinson families. In 1871 Canterbury was a station on the New Brunswick and Canada Railway and had a population of 150.

In 1904 Canterbury was a station on the Canadian Pacific Railway and a settlement with 1 post office, 5 stores, 3 hotels, 3 churches and a population of 400. Canterbury was incorporated as a village in 1966.