This house, located at 441 Balsa Street,  was built in 1894 after fire destroyed the building which previously stood on this lot. Located at the former Village of St. Mary’s Ferry landing, later known as North Devon, on the north side of Fredericton, this wood-frame house is situated on the south side of Balsa Street near the corner of St. Mary’s Street.

In 1893, fire destroyed the core of the Village of St. Mary’s. This house is significant not only for standing as an example of the post-1893 fire rebuilding and renewal process, but also because the early stage of that devastating fire was witnessed from this site.

Whitman Haines, prominent bridge builder, had the original dwelling erected during the 1860’s. Configured as a double tenement, this dwelling served as a rental property.

This house was located behind Biden’s Bakery, the first building to fall in the great conflagration of 1893. This structure, like more than two dozen others in the vicinity, was quickly laid in ashes. Mr. Haines had the ruined building replaced during the spring of 1894 when the community completed its recovery process. This new dwelling, similar to the one that preceded it, would house two families.

The Miles family resided in this house for many decades, and Mr. Miles jointly owned the private alley between this house and Bowlen’s store at 73-75 St. Mary’s Street. This narrow lane, which was later taken over by the City of Fredericton, became known as Balsa Street. 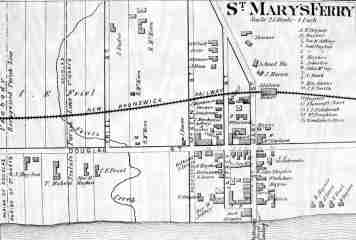