On April 9, 1819, a large crowd gathered on the shores of the Teifi River near Cardigan to see the brig Albion lift anchor for Saint John. The brig was loaded with slate and 180 passengers, families from the surrounding countryside who were looking for a better life in British America. The Albion arrived in Saint John harbour on June 11, 1819. Once declared healthy and disease-free, the Welsh immigrants came ashore and immediately held a church service to give thanks for their safe crossing. By mid-July many families had moved upriver to the capital city of Fredericton, and had petitioned the Legislative Assembly for land located about 15 miles outside the city. They named the new community ‘Cardigan Settlement’.

The arrival of 150 destitute Welsh immigrants made quite an impact on the small city of Fredericton. Many did not speak English, and none had the knowledge needed to prepare the wilderness for habitation. Thus, an Emigrant Society was formed to supply food, shelter, tools and someone to teach the Welsh how to clear land and build cabins.

The difficulties faced by the settlers was well-documented in local newspapers. In August, 1819 they were described as ‘very destitute’ and ‘straggling through the streets or crowded into Barns’. In September, the Emigrant Society was asking for more support from the good citizens of Fredericton because ‘it is evident without further assistance they must nearly perish with cold and hunger the ensuing winter’. Citizens were reminded that no matter how willing anyone would be to help these families, it would be difficult to find them housing in the coming winter because few ‘would like to admit families whose habits are so different from their own, into their houses.’

By November it was clear that the settlers, despite their best efforts, would have to be housed in Fredericton. The Emigrant Society visited the ‘various habitations’ of the Welsh, finding most of them in dire straits. William Richards, his wife and four children were ‘lying in a most miserable situation’ which shortly led to the death of William’s four-year old daughter. A few days later John George was found dead in the woods, having died of ‘fatigue and the inclemency of the weather’. Nine families wintered miserably in the Cardigan settlement, the others lived in sheds and barns in town. All were sick, cold and hungry.

At the advent of spring, the hard work resumed. By the end of 1820, the Welsh families were established in Cardigan. Some of the original families moved on to New York, Ohio and Iowa. But most stayed, and by the 1830’s Cardigan was a thriving farming community.

Over the past 198 years, the descendants of the original Welsh families prospered and spread across the country, although a few still live in Cardigan. They left the farms to become doctors, engineers, soldiers, airline pilots, nurses, teachers, entrepreneurs, accountants, pharmacists, professional athletes, RCMP officers and university professors. They served their fellow citizens at City Hall, in the Legislative Assembly of New Brunswick, in hospitals, schools, government offices and civic organizations. They were role models for hundreds of children and youth through coaching teams and leading youth organizations.

Cardigan, however, looks very different. Like most rural communities, the post-WW2 industrialization saw the end of small family farms and indeed, much of the land cleared so painstakingly by the original settlers has reverted to forest. The Welsh Chapel and graveyard has been declared an historic site, maintained by the great, great, great grandchildren of the original settlers. Services are held in the Chapel in June to commemorate the arrival of the Albion and in October to give thanks for the perseverance of our ancestors.

The story of the establishment of the Cardigan Settlement has been well documented in a book by Peter Thomas, titled “Strangers From a Secret Land”, in public records, newspaper accounts and the private letters and family bibles of Welsh settlers.

The Welsh Chapel is a modest, carpenter Gothic church located in the centre of the rural hamlet of Cardigan, between Tay Mills and Hamtown Corner, York County.

Small and rectangular, the building’s gable-end faces the Royal Road on Route 620 that connects Cardigan, New Brunswick’s oldest Welsh settlement, with the provincial capital of Fredericton. 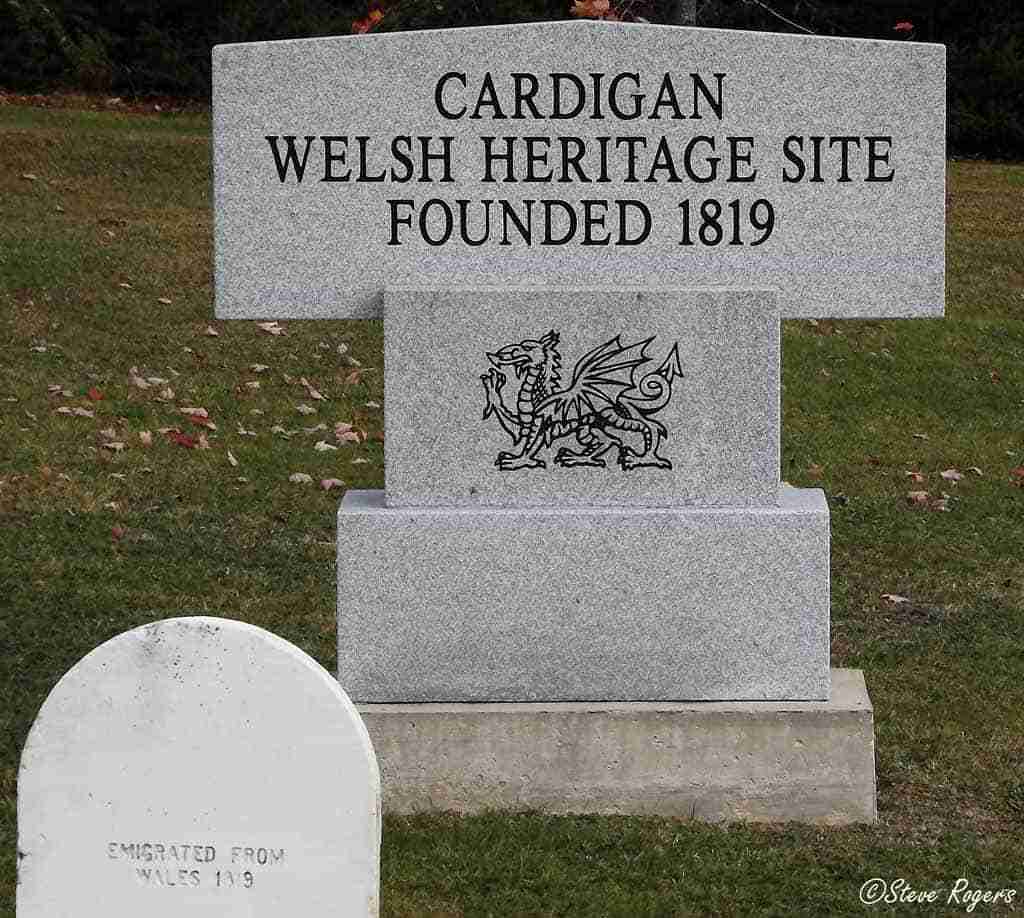 Welsh Chapel is designated a Provincial Historic Site for being a landmark reflecting the religious and cultural development of the Welsh community and for its architecture. 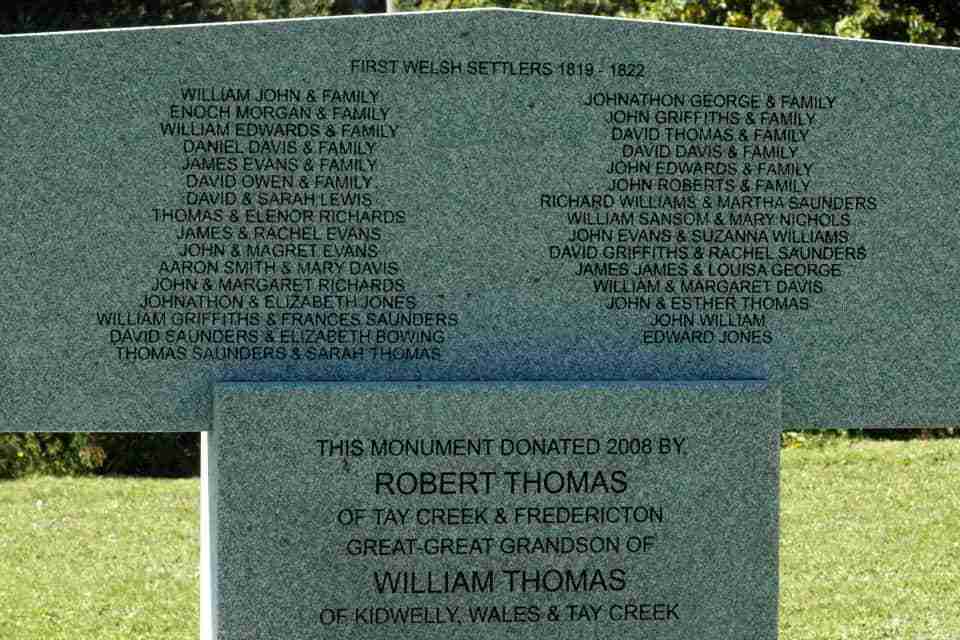 Constructed circa 1856, Welsh Chapel is associated with the first permanent Welsh settlement in New Brunswick. The original congregation dates from circa 1822 when Rev. Dafydd Phillips began conducting services in Welsh in settlers’ homes. Many of the original Welsh settlers are buried in the nearby churchyard. 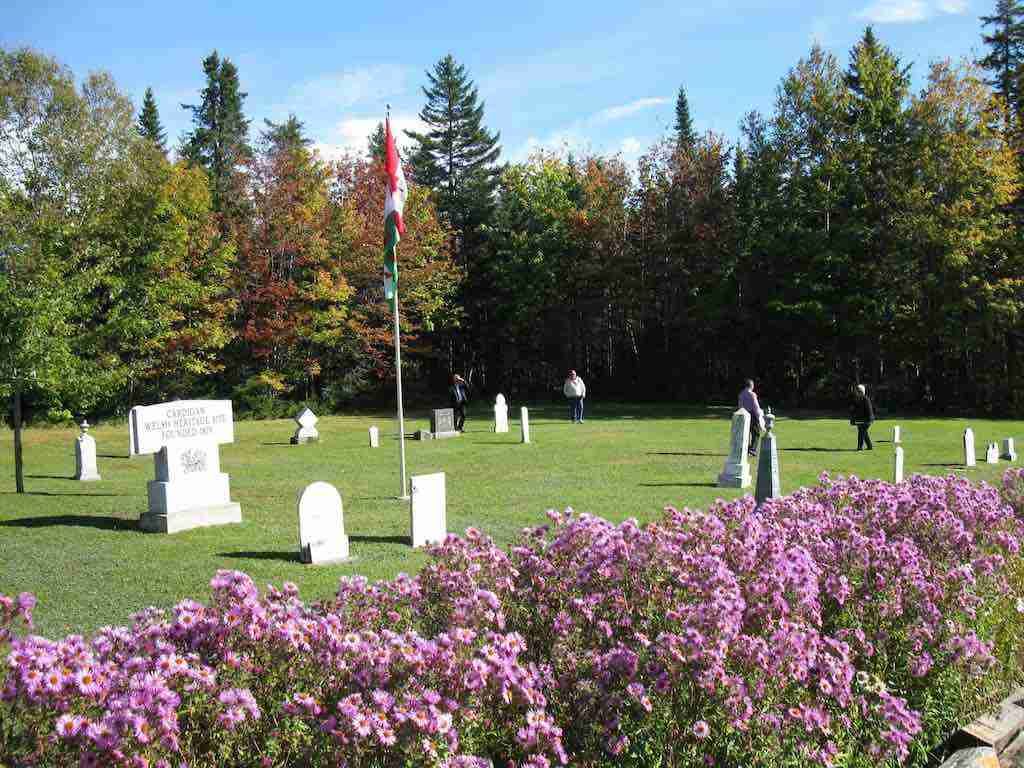 Although the designers and the builders are unknown, the surviving architectural evidence suggests that this building was based on a Protestant country church model. The consistency of its composition is noteworthy, particularly in the design elements in local woods. Unpretentious in its vernacular style, the chapel is significant for its combination of Classical and Gothic influences typical of 19th century rural New Brunswick church construction. Reflecting a Welsh-Baptist religious building tradition, the church embodies distinctive features of a mid-Victorian picturesque church that served as a social and spiritual focal point nurturing the life of this Welsh farming community. In its simplicity, Welsh Chapel has no steeple or structural additions. 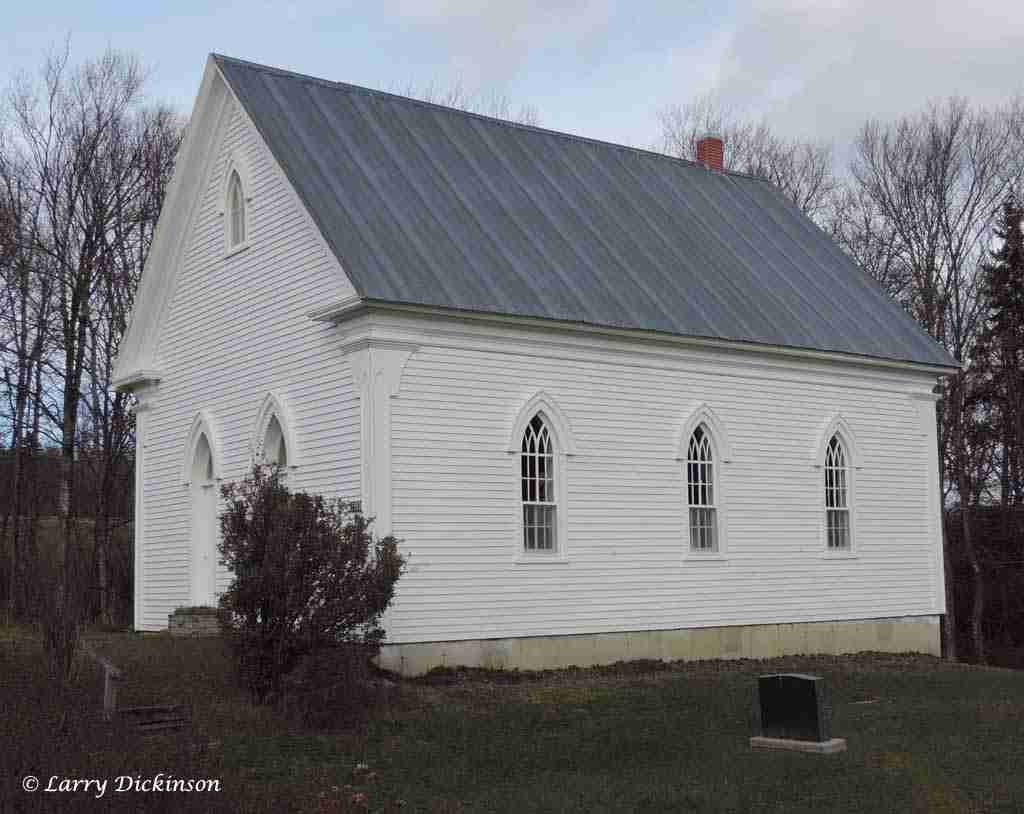 One thought on “Welsh Chapel”