This timber-girt frame house, located at 232 Northumberland Street in Fredericton, was built in 1846 by carpenter William Taylor and occupied by his family for the next 130 years.

Although the entrance is presently on the side, it was originally on the front street where the right-hand window lies and changed sometime after 1877. 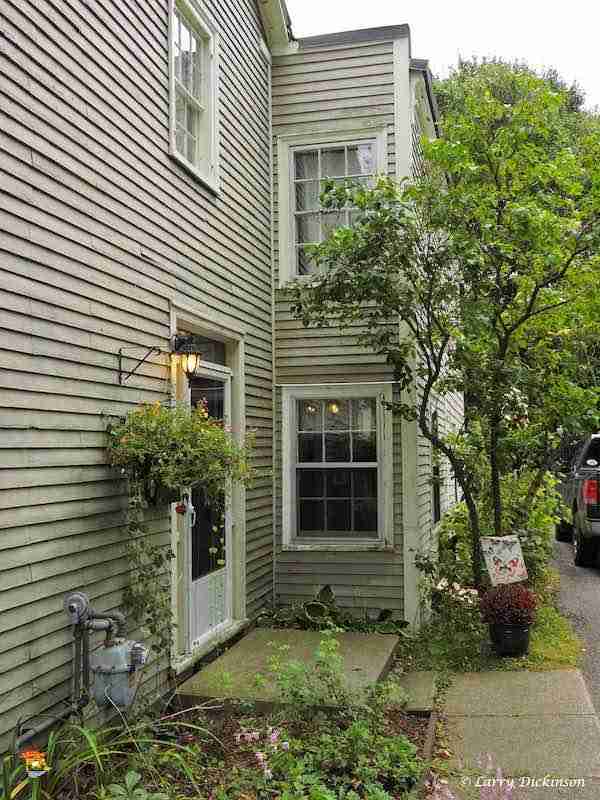 William Pentlowe Taylor (1802-1871), was a carpenter and house joiner who emigrated from London, England to Fredericton  with his father, George Taylor, prior to 1826. William and Frances Taylor had no fewer than five children: William, John, George, Susan, and Sophia. William Taylor, Sr. built a home for his family at 232 Northumberland Street, where they resided for many years. Sons John M. and George T. worked with their father, for a time, and possibly with their grandfather.

John stayed with the family business, toiling in his workshop on Westmorland Street, building things for Frederictonians. He sharpened blades and cutters, constructed ice skates and household goods; even building the first “velocipede” or bicycle in the town.

Later, but before there was a water supply system, he built hand fire pumps; copying or reinventing British or marine models, so that the fire fighters of Fredericton could do more than bucket the water from the town cisterns.

William’s second son George (1838-1913) became a painter and pioneer in photography, beginning in 1856 when he built his first camera and began experimenting with the production of daguerreotypes (he would build every one of his cameras himself). George was one of the first to photograph Fredericton and its surrounding areas, and in 1863, Lieutenant-Governor Arthur Hamilton Gordon requested that Taylor travel the Province and take photographic views, giving him a letter requesting that people offer him necessary assistance as best they could.

Taylor took an abundant number of remarkable photographs, including images of cityscapes, buildings, the countryside, military excercises, river and commercial scenes, and First Nations – often traveling with Native guides by canoe along the St. John and Tobique Rivers during such expeditions. He also had a portrait studio within the house, expanded on the river-side for this function.

With his last images being taken in 1906, the renowned Taylor photographic collection lives on in the Provincial Archives as one of the most important visual records of the Province’s history.