Willie O’Ree was born October 15, 1935 in Fredericton. A graduate of the New Brunswick Amateur Hockey Association, O’Ree who was known for his speed and checking abilities throughout his career was a threat every time he touched the ice.

As a member of the Capitals, Willie O’Ree led his team to the 1954 Allan Cup tournament before joining the Quebec Junior Hockey League’s Quebec Frontenacs in 1954-55 and leading them to the 1955 Memorial Cup tournament.

In 1957-58 O’Ree spent the majority of the seasons with the Aces while playing a handful of games with the American Hockey League’s Springfield Indians before he made his NHL debut with the Boston Bruins later that season.

Willie O’Ree’s first NHL game was marked with historic content as he became the first black person to play in the NHL before returning to the Aces in 1958-59.

After a stop in Kingston of the Eastern Professional Hockey League, O’Ree rejoined the Bruins in 1960-61 where he played in 43 games, scoring his first NHL goal against the Montreal Canadiens. Even though he spent the majority of the season with Boston, O’Ree also spent some time with the EPHL’s Hull-Ottawa Canadians before the Bruins traded him to the Montreal Canadiens during the off-season.

Having never played a game for Montreal, O’Ree was dealt to the Western Hockey League’s Los Angeles Blades after having begun the season in the EPHL. O’Ree went on to play six seasons with Los Angeles establishing a career high in goals with 38 during the 1964-65 season before he was traded to the WHL’s San Diego Gulls in the summer of 1967.

Willie O’Ree spent seven seasons in San Diego establishing a career high in points with 79 in 1968-69 and earning WHL Second Team All-Star honours before he was selected by the Los Angeles Sharks in the 1972 WHA General Player Draft.

While in San Diego O’Ree played the better part of the 1972-73 season with the AHL’s New Haven Nighthawks. Following his 13 years in the Western Hockey League, O’Ree joined the Southern California Senior Hockey League’s San Diego Charms, a team with whom he spent the next two seasons with before retiring from the game for two years in 1976-77 and 1977-78.

Willie O’Ree returned to the ice in 1978-79 as a member of the Pacific Hockey League’s San Diego Hawks before calling it a career at the end of the season.

In 2003, O’Ree was named the Lester Patrick Trophy winner for his outstanding service to hockey in the United States. O’Ree was honoured along with former Boston Bruins defenceman Ray Bourque and Ron DeGregorio, the president of USA Hockey.

In 2010, O’Ree received the Order of Canada for his outstanding service to youth development and for promoting hockey within North America. O’Ree also received the Order of New Brunswick (2005) and is an honoured member of the New Brunswick Sports Hall of Fame, where he was inducted in 1984. In 2018, O’Ree was named to the Hockey Hall of Fame in the builder category. He is the third Black player inducted into the Hall, after Grant Fuhr and Angela James.

Also in 2018, the NHL established the Willie O’Ree Community Hero Award in his honour. The award recognizes those who, like O’Ree, have used hockey to “build character, teach life skills and foster positive values.” It is open to anyone connected to the sport, including players, parents, coaches, referees, volunteers and rink owners.

O’Ree has positive memories of growing up in New Brunswick. In his autobiography, The Willie O’Ree Story: Hockey’s Black Pioneer, O’Ree wrote that colour was never an issue on those early rinks: “The fact that I was black never came up when we played as kids. You could have been purple with a green stripe down the middle of your forehead, and it wouldn’t have mattered. It was only later, when I became older, that I learned what ‘colour barrier’ meant.” 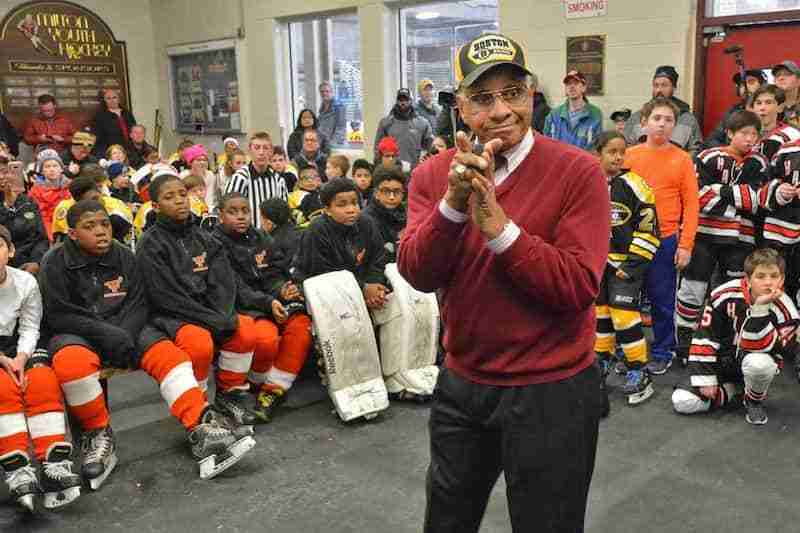 Since 1998, O’Ree has been the NHL’s Director of Youth Development and ambassador for NHL Diversity. He has travelled throughout North America to promote grassroots hockey programs, with a focus on serving economically disadvantaged children. As head of the Hockey is for Everyone program, O’Ree promotes commitment, perseverance and teamwork as well as important life skills and education. O’Ree also hosts an annual all-star weekend that brings children of diverse economic and ethnic backgrounds together for a tournament.

One thought on “Willie O’Ree”