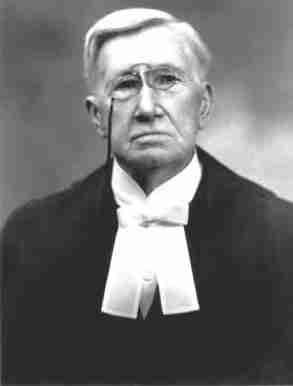 Hon. Judge Jeremiah Hayes Barry was a workaholic who lived in a large house in Fredericton. He would spend all his time in there, specifically in one room, pouring over documents.

Shortly after he died, a new person moved into the house. By coincidence, she was a lawyer and she was also a workaholic.

“She’s sort of detached from her friends and family and so she begins to work and coincidentally she works in the exact same room where Judge Berry had worked in.”

One night, at the stroke of midnight while she’s working in the room where Berry had all those years, she hears something downstairs: a huge clatter that has her bolt upright.

“She runs down to see what it is and it stops and she thinks ‘It’s a new house, new sounds, things I’m not used to.’”

She goes back upstairs to find all of her papers thrown everywhere. The lawyer dismissed this as well, thinking that the wind had blown the papers everywhere.

But it happens again. Night after night she hears something downstairs and comes back to find her work thrown everywhere.

Finally, she had had enough, she promises herself that if it happens again, she would stay in the room.

“So, next day, she works all through the day and into the night and at the stroke of midnight again, she hears the noise from downstairs and it grows louder and louder until she can’t take it anymore and she runs downstairs to see what it is.”

Unlike the other nights, however, she stops herself and comes back up the stairs to see what’s happening.

“She runs upstairs to see this spectral figure standing in the room with a pocket watch, swinging it back and forth saying ‘Tsk, tsk, tsk.’”

People believe that that ghostly figure was Berry and that he had “appeared these nights to warn her of the life that he had lived, a life of solitude and of nothing but work.”