After years of efforts to save the Alexander Rankin house by both government and cultural groups in Miramichi, this historic house was demolished in 2017. The home had been closed since 2010 after a flood left mould damage throughout the building.

The Rankin house, a two-storey Georgian style building, was erected in 1837 to replace an earlier home which burned down in March of that year. The first house had been built soon after Alexander Rankin and his cousin, James Gilmour, arrived at Miramichi in 1812 from Scotland to establish the Gilmour, Rankin & Co. firm and found the village of Gretna Green, later renamed Douglastown. 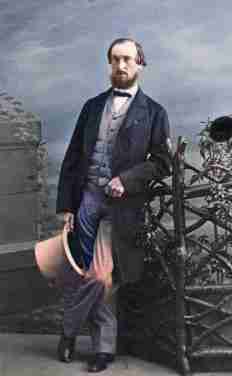 The house was occupied by Mr. Rankin until his death in 1852 and also housed the clerks who were sent from Scotland to be trained by the Gilmour, Rankin firm. After 1852 Richard Hutchison, who had been a partner since Mr. Gilmour returned to Scotland in 1842, took over management of the firm and lived in the Rankin house. When Mr. Hutchison died in September 1891 his son, Ernest, did not wish to live in the house and gave it to the village for a school. This was in 1892 and for the next 88 years it served that purpose. It was left vacant when a new elementary school was opened in Douglastown in 1980.

Use as a school made a number of alterations necessary but these resulted in only minimal damage to the structure. The elegant “Greek revival” portico at the main entrance was removed and destroyed, an iron fire escape defaced the front facade, washrooms were installed beside the staircase, a central chimney was built and the 14 fireplaces were blocked off. The exterior was covered with clapboard siding and walls removed on the second level to accommodate the school classes.

A survey was made for the provincial government in 1980 by Robert Power of Fredericton, historical architect, who reported the building as sound and worthy of restoration. Three years later the work of preservation was undertaken by the Historical Society under the direction of the president, John McKay. 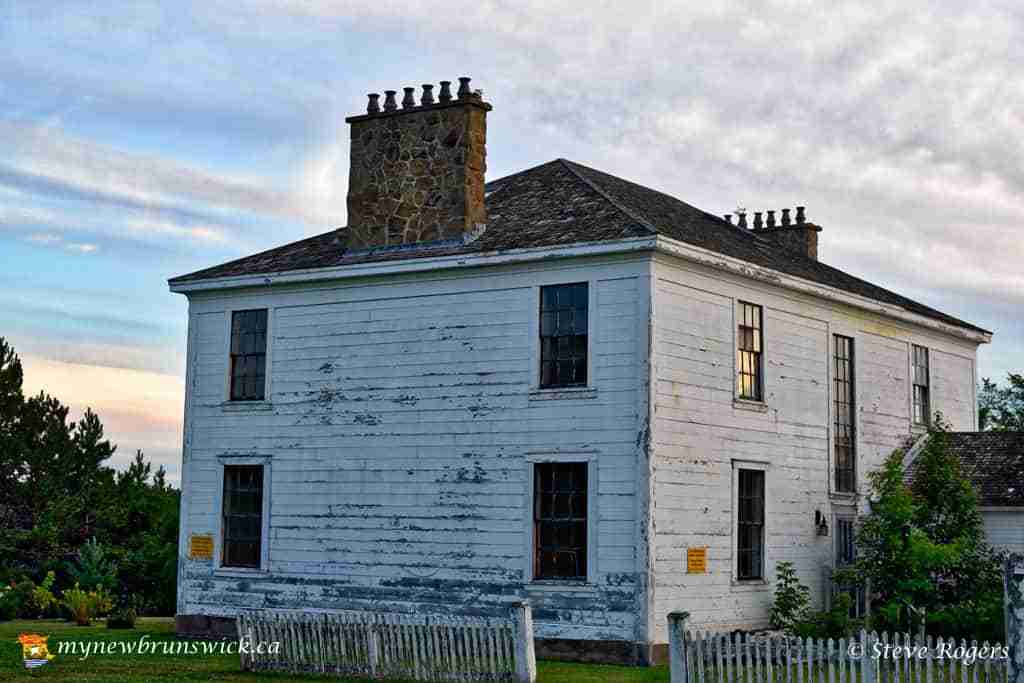 The portico has been duplicated and replaced, the clapboards removed and the original flush board siding caulked and painted and a new roof laid. The massive stone chimneys with their quaint chimney pots have been rebuilt. All necessary repairs have been done and new electrical wiring and plumbing installed, as well as sky-lights and windows in the original style. In the basement the kitchen, with its huge stone fireplace with cast iron oven and water tank is unchanged. A one-storey extension, which was added to the north wall to serve as caretaker’s quarters, has been retained and repaired.

The house is an excellent example of colonial architecture. It has a central hall and originally had four rooms on each of the first and second floors. There are now three on the first and two large rooms on the second; here the fireplaces have been opened up. The entrance hall has its original archway with panelled embrasure, plaster trim and cornices. The staircase and railing have been repaired. 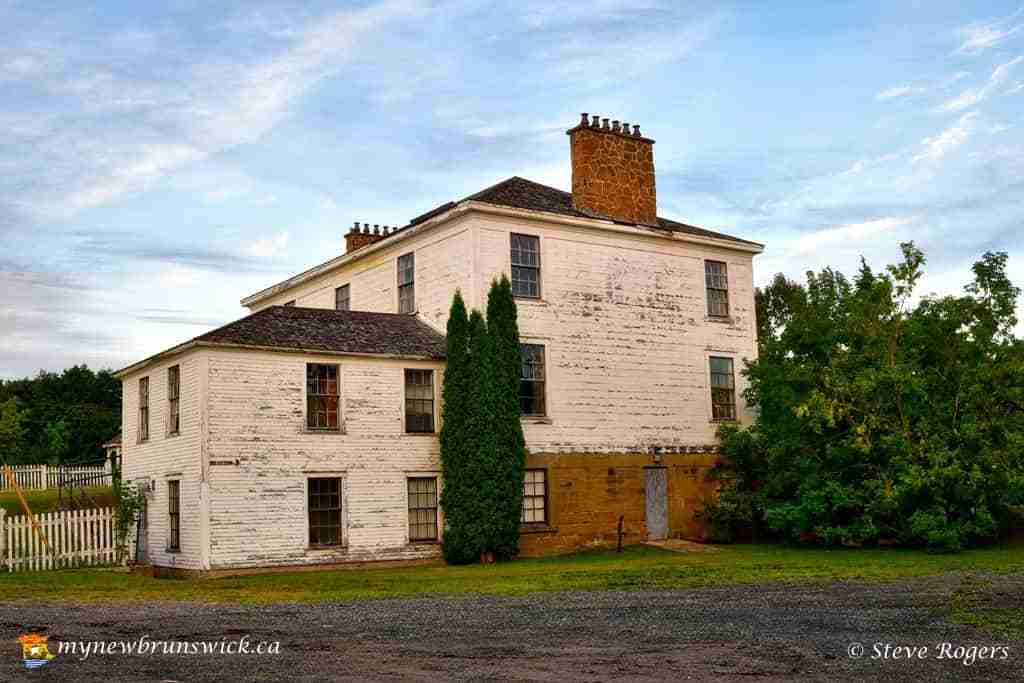 The 1837 house was built by William Murray, the Miramichi’s famed master builder who erected many of the area’s heritage structures. His fine workmanship is evident everywhere. The house is a wood frame building on a stone foundation; its front facade faces the river, which in the early days was the chief thoroughfare for travellers.

In Mr. Rankin’s time and well into the 20th century a pair of very fine handmade wrought iron gates closed the end of the driveway. These gates, made by John Norman about 1841, were removed and destined for destruction. Fortunately, the late Dr. Louise Manny managed to save the gates and they are now at the entrance to the pioneer graveyard at The Enclosure, the provincial park which Lord Beaverbrook donated to the province. 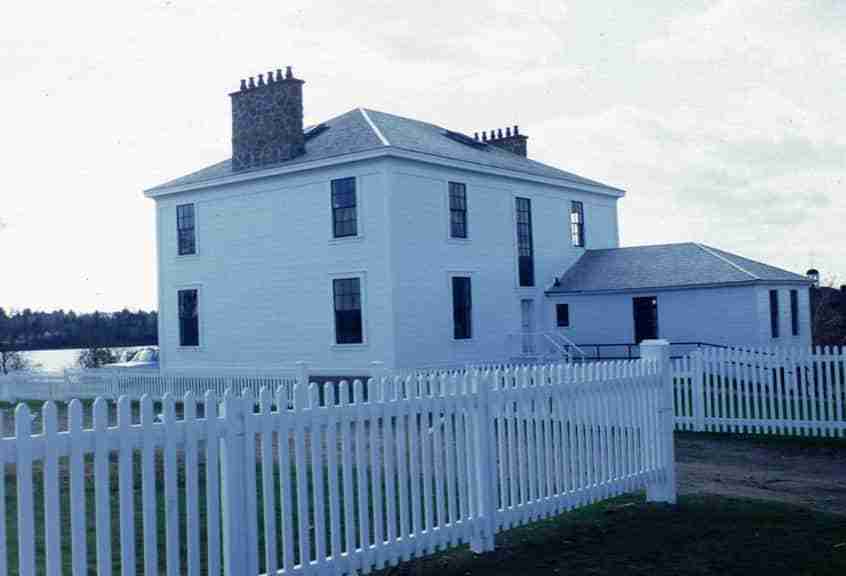 Honourable Alexander Rankin was the most important and influential figure in Miramichi during the years of the area’s greatest prosperity. Although he was five years younger than James Gilmour he was the dominant partner in Gilmour, Rankin Company which furnished a livelihood for hundreds of workmen for many years. In his 40 years in Miramichi he was a leader in all community affairs. His spacious home was a centre of hospitality and all important visitors were entertained there.

Both Rankin and Gilmour were born in Mearns, Renfrewshire, Scotland, and were members of a remarkable group of families, all related by blood or marriage, who made up the several firms associated with Pollok, Gilmour & Co. of Glasgow and Liverpool. This company was one of the greatest timber, trading and shipbuilding firms in the world. The decision to set up a business at Miramichi was made after an inspection trip by Allan Gilmour and the two young men were sent out in 1812. The workmen who came with them were set to work to clear a site from the wilderness and lots were laid off and sold to the employees at low prices. Living quarters, a mill, store, offices and warehouses were erected. It was not until 1857 that the firm began to build ships in their own yard although many Miramichi ships had been sold to the Pollok, Gilmour Co. for its fleet. From 1851 the Ferguson, Rankin & Co. firm, an off-shoot of the Douglastown business, built ships in their yard at Bathurst.

Rankin was a force in the community and the province, respected, even revered, for his generosity and kindness, his integrity and fair dealings. He promoted education and agriculture, served on the Board of Health, was a contributor to all good causes and a supporter of St. James Presbyterian Church in Newcastle. At the time of the Great Fire of Miramichi in October 1825 he sheltered hundreds of the destitute in his home and offices; he headed the relief committee and gave generously from his own pocket as well as goods from his warehouses. It was said of him that “his charity was unbounded.” 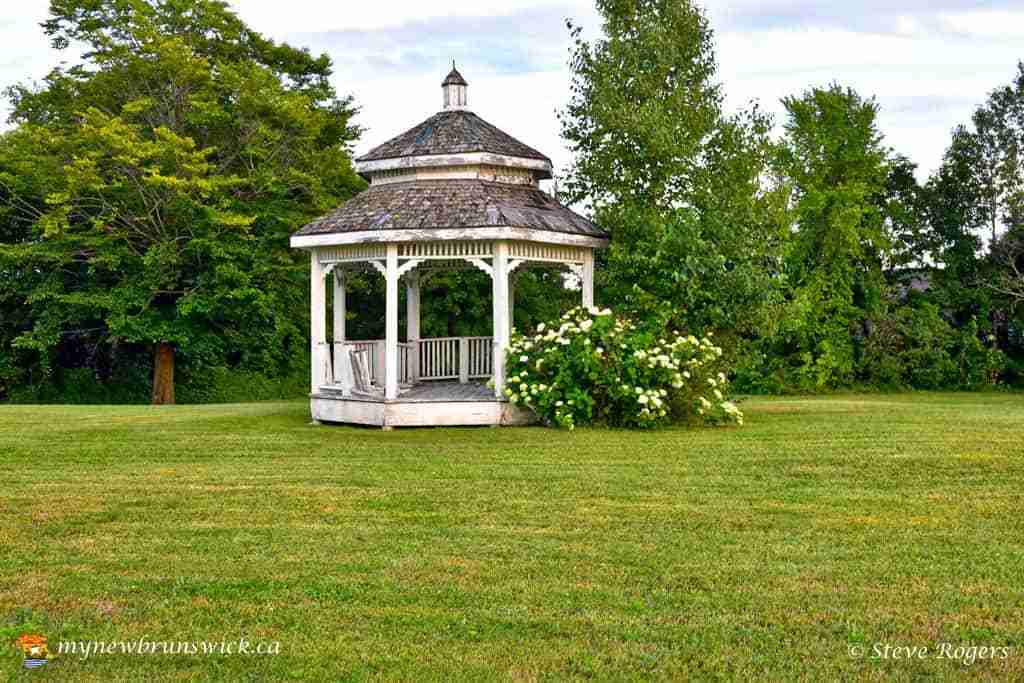 Alexander Rankin was elected to the provincial House of Assembly in 1827 and served there until his death in 1852, being chosen to represent Northumberland County in seven general elections. In 1847 he was appointed to the Legislative Council, as minister without portfolio, which post he held also until his death. As a legislator he encouraged agriculture and domestic manufactures and the education of the young. His death occurred on April 3, 1852, while on a visit with his brother, Robert, in England. He had never married.

In 1835 Rankin became the unpaid keeper of a postal way office at his Douglastown store. He was an organizer and executive officer of the branch of the Commercial Bank of New Brunswick which was opened at Newcastle in 1836. He was a founder of the Highland Society in 1841. In 1843 he was appointed an Indian commissioner for Northumberland County. In 1844 he was designated a member of the Northumberland and Gloucester Board of Health, which was set up to control the outbreak of leprosy in the Tracadie area. In 1850, as president of the Newcastle and Douglastown Mechanics’ Institute, he laid the foundation stone for the hall which still stands in Newcastle. He was president of the Highland Society at the time of his death, as successor to Dr Alexander Key.