Shriners are a brotherhood of men committed to family, engaged in ongoing personal growth, and dedicated to providing care for children and families in need. Our backgrounds and interests are diverse, but we are bound together by our shared values and a desire to have fun, do good and build relationships that can last a lifetime.

In 1870 a group of Masons gathered frequently for lunch at the Knickerbocker Cottage on Sixth Avenue in New York City. At a special table on the second floor a particularly fun-loving group of men met regularly. Among the regulars were Walter M. Fleming, M.D. and William J. “Billy” Florence, an actor. The group frequently talked about starting a new fraternity for Masons – one centered on fun and fellowship, more than ritual. Fleming and Florence took this idea seriously enough to do something about it. 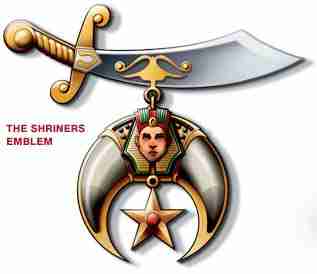 Billy Florence had been on tour in France, and had been invited to a party given by an Arabian diplomat. The exotic style, flavors and music of the Arabian-themed party inspired him to suggest this as a theme for the new fraternity. Walter Fleming, a devoted fraternity brother, built on Fleming’s ideas and used his knowledge of fraternal ritual to transform the Arabian theme into the Ancient Arabic Order of the Nobles of the Mystic Shrine (A.A.O.N.M.S.).

With the help of the Knickerbocker Cottage regulars, Fleming drafted the ritual, designed the emblem and costumes, formulated a salutation and declared that members would wear the red fez.

The first meeting of Mecca Shriners, the first temple (chapter) established in the United States, was held September 26, 1872. As word got out about the fledgling organization, membership grew rapidly, spreading across the U.S. In the early 1900s, membership spread into Canada, Mexico and Panama. Today, Shriners International is a fraternity with nearly 200 temples in several countries, thousands of clubs around the world and hundreds of thousands of members dedicated to the principles of brotherly love, relief and truth. 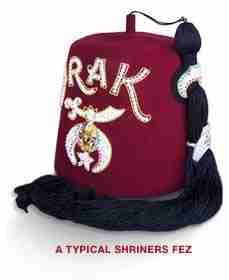 The fez is one of the most recognizable symbols of Shriners International and was adopted as the Shriners’ official headgear in 1872. Named after the city of Fez, Morocco, the hat represented the Arabian theme the fraternity was founded on. It also serves as an outward symbol of one’s membership in the fraternity. Much like the white apron worn by Masons as a symbol of their brotherhood, the fez is worn only by Shriners as a symbol of their membership in this unique fraternity.

During the early part of the 20th century membership in Shriners International grew at a steady pace. By 1946, membership had jumped to 150,000 Nobles and another 250,000 had joined by 1958. In fact, Shriners International experienced one of its largest periods of growth in the years following World War II as returning soldiers looked for new ways to continue the camaraderie they had experienced with their fellow soldiers.Today the fez is worn at Shriners’ functions, in parades and at outings as a way of gaining exposure for the fraternity. Members customize their fez to show their allegiance to their temple. Look closely at a fez and you will also learn other important information about its wearer, such as membership in Shrine clubs, special roles within the organization and much more. Each fez is custom made and a Shriner may own more than one fez depending on his activities and memberships.

As the number of temples and nobles grew, so too did the hospitals. By 1958 the hospitals’ endowment was valued at $125 million and growing. The nobles were proving themselves to be excellent fundraisers. The Shrine Circus, founded in 1906 for fun and entertainment, began to play a role as a significant fundraiser in support of the hospitals.

Today, there are nearly 200 temples across North America, South America, Europe and Southeast Asia. In addition to the Shrine Circus, temples hold events throughout the year ranging from fish fries to concerts, car shows to fishing tournaments. It is fun with a purpose – supporting the important mission of Shriners Hospitals for Children®.

The Northeast Fall Field Days were held in Fredericton the weekend of September 23-25th. A giant parade featuring clowns, mini cars, and bands was held through downtown Fredericton.

Click on a thumbnail to see photos of the parade