The very earliest settlers in Harvey arrived in Saint John aboard the Cornelius of Sunderland in 1837. It had been their intention to settle in Stanley on lands being developed by the New Brunswick and Nova Scotia Land Company, but these intentions were scuttled when they found that the Company’s promoters had exaggerated the attractiveness of the place. These settlers became the pioneers of Harvey Settlement, later called Harvey Station, and many of their descendants remain in the area today.

About thirty emigrant families arrived at St. John in the spring of 1837, and went to Fredericton, intending to settle on the York County lands of the New Brunswick and Nova Scotia Land Company at Stanley. They were a mixture of English and Scotch, from the banks of the Tweed, — farm labourers, healthy and strong, but without means. Disappointed in their engagements with the Company, they applied to Sir John Harvey, then Lieutenant Governor, who sent a message, recommending their case to the House of Assembly, then in session. At that time, the whole region from Hanwell to Magaguadavic was an unbroken wilderness, and through it a line for a Great Road from Fredericton to Saint Andrews had just been explored and marked out; and a member of the Assembly who had assisted in the exploration proposed to settle them on this line. The House was informed that the proposed road passed through an extensive tract of good hardwood near Oromocto Lake, and the plan was to lay off thirty-two lots, each of 80 rods front, and 200 rods long, sixteen lots on each side of the road. The men were to be put under the direction of two judicious persons, well acquainted with clearing land. They were to be furnished with axes and provisions to cut down and prepare for burning an opening twenty-eight rods wide and four miles long; to peel spruce bark to cover the houses; to burn the chopping; and to clear an additional three acres of land at the front of each lot for planting. They would then bring out their families who would be furnished with supplies so that each of them could sow and plant their three acres in the following spring.

Such was the plan which was agreed on at the time by the House of Assembly but, on preparing for the proposed survey, it was discovered that 2,200 acres of the intended land had previously been selected by three individuals, and could not be obtained. This was a great disappointment, and hindrance at the outset. Another tract of land, less favourable, had to be selected, some of which was swampy and not good for first crops. No continuous opening could be made and the clearings had to be made in separate places. The poor fellows, instead of getting each three acres ready for sowing and planting the following spring, had to toil on for three whole years, before they all got settled on their separate allotments. They proved first rate road makers, and ultimately paid for all the supplies furnished by the Government. As an aside, they had no boards to finish their floors, so the cut their own using whip saws. The houses themselves were, of course, made of logs.

Following is an extract of the Report of the Hon. L.A. Wilmot, Commissioner of the Harvey Settlement, to Sir William Colebrooke, dated at Fredericton, 9th February, 1844:

“The great success which has followed the labours of these industrious and valuable settlers, is an unquestionable proof of what may yet be done on our millions of acres of wilderness lands. The return shews, that from land where not a tree had been felled in July 1837, there have been taken, during the past autumn, 260 tons of hay and straw and 15,000 bushels of grain, potatoes and turnips.”

“It is desirable that the return may be circulated among the settlers’ friends and countrymen in the north of England, as well as other parts of the United Kingdom, so that the capabilities of our new land and soil may appear, and that it may also be made known, that we have at least five millions of acres yet undisposed of, a great portion of which is of better quality than the land at Harvey, whereon the sober and industrious emigrant may create a home under the protection of British laws, and in the enjoyment of British institutions.”

Those settlers began with nothing. They suffered many hardships, but they were inured to labour, and overcame them all. They commenced in 1837, and in 1843 had property in cleared land, farm produce, cattle, sheep, swine, etc., of the value of £4,289. During all that time, only two deaths had occurred, while there had been thirty-nine births, and all without medical aid!

Equally successful were a number of poor emigrant families from the South of Ireland, who settled in a body on a tract of wild land, distant from the Harvey only a few miles. They also began with nothing, and at the end of the second year, gathered seven thousand two hundred and seventy-six bushels of grain, potatoes, and turnips, and besides making more than four miles of road, accumulated property to the amount of more than £2,000.

1. Situated at the southeastern end of Harvey Lake, the village is approximately 35 km southwest of Fredericton.

2. The lake was originally known as Bear Lake, then for a time as Big Cranberry Lake, and finally after 1869, as Harvey Lake, when the community that eventually would become Harvey Station was established at the intersection of the “Great Road” and the newly built railway line (see below).

4. The village traces its name to Harvey Settlement (parish of Manners Sutton). 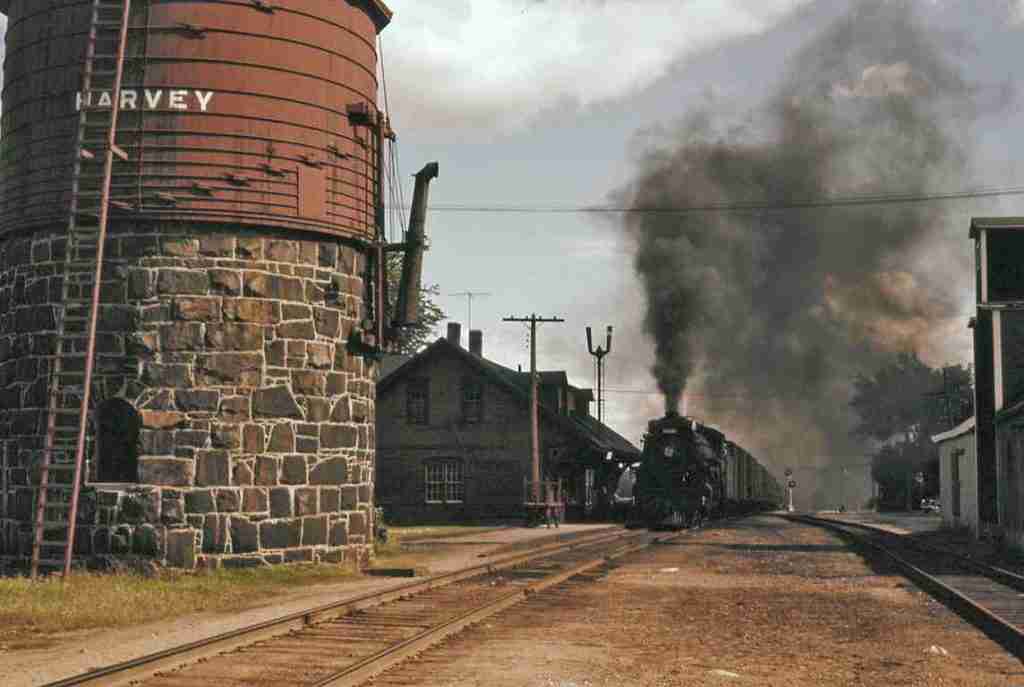 5. Harvey Station was the name for the railway station that was built at the extreme northern fringe of Harvey Settlement when the European and North American Railway (Western Extension) was constructed in 1869 to connect Saint John with Vanceboro, Maine.

7. Harvey Settlement owed its origin to a party of Northumberland and Borders immigrants, recruited for Stanley (a community in York County north of the Saint John River) by the New Brunswick Land Company.

8. Upon their arrival in 1837 they found the Company commissioner absent, and discovered that the Company’s inducements had been exaggerated. They appealed to the Legislature and to the Governor, Sir John Harvey, to be permitted to purchase land outside the Company’s territory.

9. They were given work on the new St. Andrew’s Road and the right to draw lots upon it, in the community that would bear the Governor’s name.

10. The party of 154 had arrived at Saint John from Berwick-upon-Tweed aboard the Snow Cornelius of Sunderland, and hailed mostly from northern Northumberland, many being from the town of Wooler or its rural environs commonly known as Glendale.

11. Some friends and close relatives of the Cornelius settlers of 1837 arrived as chain migrants in the community beginning in 1840 (e.g., Briggs, Swan, Craigs, Moffitt), but the numbers were not large. They primarily came from Northumberland and the Borders with very few arriving from elsewhere in Great Britain. These later arrivals primarily settled on lots in the outer tiers of Harvey settlement.

12. A major early accessions to Harvey settlement following the arrival of the original Cornelius settlers of 1837 were five Little brothers 1840. They were not part of any Northumberland chain migration though, having migrated to New Brunswick in 1832 from Dumfries, Scotland in the western Borders region, although their grandfather had already emigrated to New Brunswick in 1819.

13. They obtained title in 1842 to a 2,000 acre (8 km2) tract to the west of the community that became known as Little Settlement. They in turn influenced their relatives, the Heughan and Lister families as well as a few others, to migrate from Dumfriesshire to join them.

14. Several other friends and relatives of the original Cornelius Party chose to emigrate to the community beginning in 1850 when the Capt. John Campbell Block on the southern margin of Harvey Settlement became available for settlement at the price one dollar per acre (e.g. Rutherford, Cleghorn, Wood, Swan).

15. This 1,000 acre (4 km2) block bordering Oromocto Lake became known as Tweedside, named for the Tweed River in the settler’s homeland. Other later arrivals, and members of the second settler generation, also obtained lands on the 1,500 acre (6 km2) Simonds and Beauchant tracts that straddled the road between Tweedside and Harvey.

16. A few other immigrant families also arrived in the community in the 1840s and 1850s independent of each other and previous waves of migrants.

17. In 1852 the New Brunswick government and the European & North American Railway Company signed a contract for the building of a railway to link the province with Nova Scotia and Maine.

18. By 1869 the section between Saint John and Fredericton had been completed and passed through the extreme northern fringe of Harvey Settlement.

19. The passenger station was built in 1869 and extended in 1909, with the community located near the tracks known as Harvey Station. The E&NA was later absorbed into the New Brunswick Railway which became part of the Canadian Pacific Railway (CPR) in the 1880s.

20. Harvey was placed on the CPR’s transcontinental line from Saint John to Montreal and brought growth and prosperity to Harvey Settlement. The village’s present-day business district was established near the station when hotels were built to accommodate train passengers, as well as several stores and mills to provide goods to people in the area.

21. Rail travel eventually went into decline and became supplanted as roadways were improved.

22. By 1962 the Harvey passenger train station was slated for destruction. A portion of the building was rescued from destruction and moved across Harvey Lake on the ice in winter where it is now a cottage in Herbert Cove.

23. Via Rail’s Atlantic was discontinued through the village in 1981; upon the train’s revival from 1985 until its second discontinuance in 1994, the train did not stop in Harvey Station.

24. On January 1, 1995, CPR sold its lines east of Montreal with the line running through Harvey now being operated by the New Brunswick Southern Railway.